Here at Lady JoJo’s we unreservedly love polka dots so when we saw it all over this season’s catwalks and in so many high-street shops we got a little bit excited.  Remember when leopard print was all over the shops?  Well, I still have a wardrobe full of clothing bought that season so when such fabulous fads are back in fashion it means one thing – it’s time to bulk buy!  I want to have a little look at where these ubiquitous dots have come from and how you can wear them today.

Polka dot fabric did not really exist prior to the mid-19th century as machine’s were required to create the even spaced dots – otherwise it looked blotchy and unattractive. A combination of the advent of the industrial age, meaning that this fabric could now be mechanically produced, and a dance craze at the time, ‘The Polka’, established this pattern as fashionable.  The Polka was a dance that started in Europe and quickly spread over to the States.  The link between the dance and the pattern is difficult to establish however it is generally believed that dresses with this pattern were commonly worn when dancing The Polka and the link between the two became cemented. 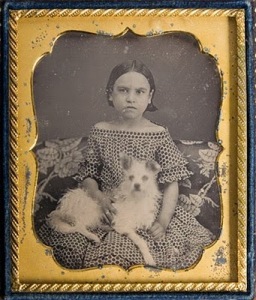 Polka dots remained relatively fashionable throughout the remainder of the 19th century but received a new peak in popularity in 1928 with the introduction of Minnie Mouse by Walt Disney.  Polka dots were used everywhere from fashion to household objects and became so popular that in 1936 a designer actually tried to copyright the pattern – she obviously failed.

In the 1920s Polka Dots were particularly popular on swimwear. 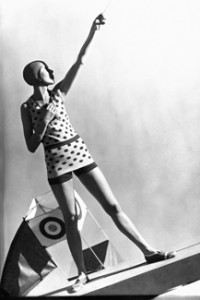 The 1930s saw polka dots entering into high fashion and starting to be used more seriosuly by designers. 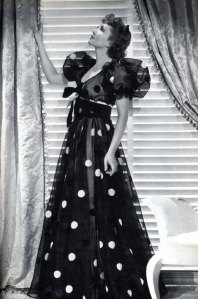 As we all know 1940s fashion was simple and conservative during the war and any fabrics or patterns which were considered luxuries and not necessities were very rare.  Polka Dots were not as prominent during this period but here is a lovely snap of a young Elizabeth Taylor sporting the look.

Polka Dots absolutely boomed in popularity in the 1950s and you could find such a an array of objects in the now familiar polka dot print – clothes, dinnerware, accessories, curtains, toys, pop art, etc.  Again, polka dots were particularly fashionable for swimwear. 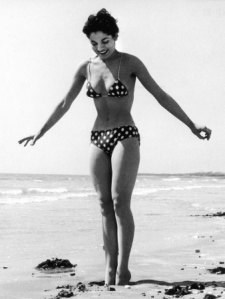 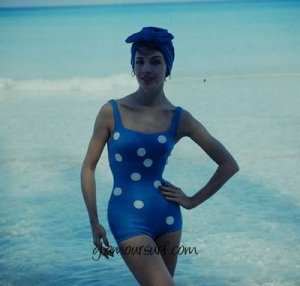 Polka Dots were back at the forefront of high fashion in the 1950s and here is a selection of some of my favourite deisnger dresses from this decade including examples from the three dominant influences on post-war haute couture fashion: Christian Dior, Pierre Balmain and Jacques Fath. 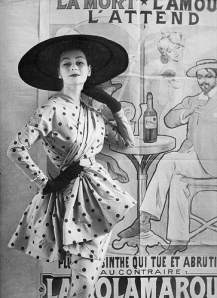 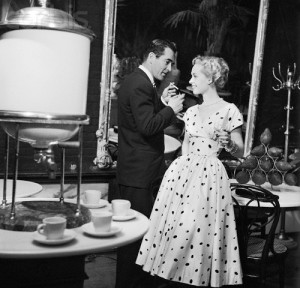 The ever popular polka dot continued in popularity throughout each subsequent decade however I have decided to stop before I have to delve too much into the 1960s and the novelty song, ‘Itsy Bitsy Teenie Weenie Yellow Polka Dot Bikini’.

In my next blog, I intend to continue with my polka dot love by exploring how how the pattern has returned in this season’s designer collections.